You don't need to travel to Florida or Mexico to see sand like this. Nope, just a few hours driving north.
It's beautiful up here.
Posted by Deirdre Honner at 5:00 AM No comments:

There is some notion that the Great Lakes, and Lake Huron in particular, is dirty. We beg to differ.
Yup, that's crystal clear Lake Huron looking at you.
Posted by Deirdre Honner at 3:19 AM No comments:

It's not always pink.  Or red.

Posted by Deirdre Honner at 10:40 AM No comments:

Email ThisBlogThis!Share to TwitterShare to FacebookShare to Pinterest
Labels: EOTE

Yup.  All the time. Year round.  Only during the winter, it's under snow.


Posted by Deirdre Honner at 5:23 AM No comments:

A man in Topeka, Kansas decided to write a book about churches around the country. He started by flying to San Francisco and worked east from there.

Going to a very large church, he began taking photographs and making notes. He spotted a golden telephone on the vestibule wall and was intrigued with a sign, which read, Calls: $10,000 a minute.  Seeking out the pastor, he asked about the phone and the sign. The pastor answered that this golden phone was, in fact, a direct line to heaven, and if he paid the price, he could talk directly to God.

The man thanked the pastor and proceeded on his way. As he continued to visit churches in Seattle, Dallas, St. Louis, Chicago, Minneapolis and other cities around the United States, he found more phones, with the same sign, and the same answer from each pastor.

Finally, he arrived in up north Michigan. Upon entering a church in Oscoda - behold - he saw the usual golden telephone. But THIS time, the sign read,  Calls: 35 cents.

Fascinated, he asked to talk to the pastor, "Reverend, I have been in cities all across the country, and in each church I have found this golden telephone, have been told it is a direct line to Heaven, and that I could talk to God. But in the other churches, the cost was $10,000 a minute. Your sign reads only 35 cents a call. Why?"

The pastor, smiling benignly, replied, "Son, you're up north in Michigan  .... You're in God's country. It's a local call."

Thanks Janet.
Posted by Deirdre Honner at 10:33 AM No comments:

Seats with a view 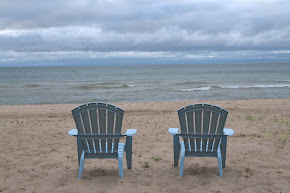 Pull up a chair! 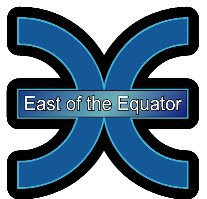 Welcome to the Sunrise Coast of Michigan, located on the beautiful shores of Lake Huron.

Our cottage, East of the Equator, sits on the stunning sugar sand stretching from Tawas to Greenbush. It's simply beautiful here.
We started this blog because so few Michiganders think about the east side of the state for vacations and long weekends. We think that is a colossal mistake.

We encourage you to explore the Sunrise Coast. Our hope is to share in words and pictures the joy, the beauty, and the wonder we find every time we drive north. Come visit.
Cheers from East of the Equator!
Paul, Deirdre and Samson the dog